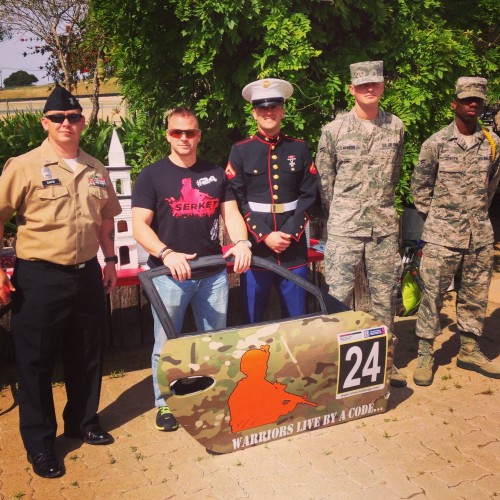 Mark Llano and the SERKET Racing team had a very successful weekend at the Continental Tire Monterey Grand Prix at the legendary Mazda Raceway Laguna Seca track. The track is filled with fast sections, elevation changes, and the dreaded five-story descent known as the “Corkscrew.” Despite his spin out on the first turn of Race #1, Llano still managed to finish 10th in the competitive Gold Class after qualifying for 9th. Llano had a better result in Race #2; he finished 6th in class and brought the car home safely. The team only has three weeks to prepare for their next race.

Mazda Raceway honored the military this weekend by offering free admission on Saturday, pit tours, hospitality access, and ear protection courtesy of SERKET Racing and SureFire. There was also a military charity auction, which featured a signed SERKET Racing car door, a SERKET Racing U.S. flag edition longboard from KOTA Longboards, a signed pair of collectable SERKET Racing MOMO racing gloves, and artwork from Alexander Mijares’ “Make Art Not War” series, which was courtesy of Eduardo and Henrique Cisneros of MOMO Motorsports. Llano and the team were appreciative of Mazda Raceway for helping them continue their mission of giving back to our nation’s heroes.